Every middle school teacher in America has stood in front of a group of students and delivered the old Benjamin Franklin adage that “the only things guaranteed in life are death and taxes.” Luckily for those of us in the water industry, we know that this middle school lesson is wrong, or at least incomplete – the only things guaranteed thus far throughout history have been death, taxes and natural infrastructure monopolies.

Natural monopolies, and the economics that define them, drive nearly every decision that is made in the municipal water sector, from the decision to construct a new treatment plant, to hiring a new wastewater operator, to adopting a novel technology. Natural monopolies are defined as industries in which long-run average cost continues to decline with increasing quantities of production…in which multiform production is costlier than production by a monopoly. In other words, the cost to a society is greater if there are more producers in the marketplace.

For the water and wastewater sectors, natural monopolies are why we never see two utilities build competing sets of water distribution pipelines in a city, at a cost of billions of dollars, when a single distribution system would be sufficient. The return on investment timeframe for this second utility would be nearly infinite, the capital costs extravagant, and the prices passed down to consumers completely untenable.

Nearly everyone in the industry has concluded, rightfully and with the full backing of modern economic theory, that natural monopolies exist precisely because their cost advantage is so great when compared to possible alternatives. And, while there are readily apparent downsides to any monopolistic supply system, well-regulated water monopolies (complete with public utility commission, rate payer advocates, and price justifications) have shown that they can provide a unique good to consumers. Or so says the last 100 years of infrastructure history in America. 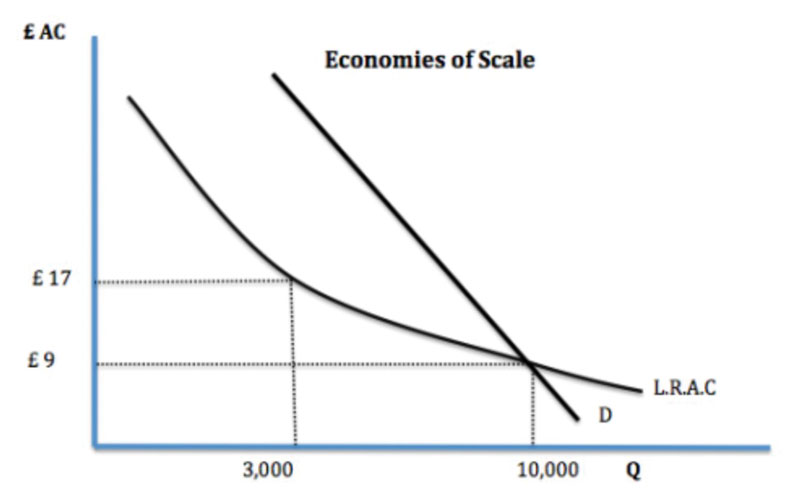 But what if modern economic theory is wrong – or, like Ben Franklin’s old middle school adage, at least incomplete? What happens if the successes of past water monopolies in the United States have limited our thinking as to what success could look like in the future?

We happen to live in a time when many of the business worlds’ presuppositions about what is ‘possible’ have been completely upended. Our most valuable and influential companies don’t produce physical products – Facebook, Google, Twitter – and the sharing economy – Uber, Lyft, AirBnB – has completely upended stronghold tourism and transportation industries, to name a few. Think back twenty years and the eventual impact that these firms would have not just on businesses but society as a whole would be nearly impossible to imagine. Who could have guessed in 1999 that a platform for writing 142 characters could one day displace newspapers as the predominant means of reading daily events? And yet, while the tech industry has radically altered the makeup of our lives, the water industry has continued to rely upon traditional business models with regards to the treatment and distribution of both water and wastewater. The belief that the water industry is not constrained by natural monopoly theory, whether or not it seems impossible today, could be the necessary belief that leads to unprecedented market innovation.

Beginning with the first Roman aqueducts, Western society has always relied upon centralized treatment plants and pipeline systems for collection, treatment, and distribution. For nearly a century, this system was the predominate model of success in the water and wastewater industry, and no one dared, or was at least successful in his/her dare, to take a leap and state that we must implement the next generation solution to our water and wastewater needs. Today, however, the technology exists both for on-site wastewater reuse (as can be seen at water-pod.net), as well as on-site water generation (zeromasswater.com).

If the technology has been developed to safely and effectively produce and treat on-site, should we continue to be dependent upon monopolistic utilities to manage our water and wastewater? If nothing else, the threat of a competitive supply should force existing utilities to become more price competitive and quality cognizant in order to retain their existing customer base.

What if, rather than relying upon pH and DO meters located 10 miles away for ensuring water quality at one’s tap, every consumer had access to real-time water quality monitoring hardware informing them of exactly where their water came from and its quality? Rather than utilizing the grid as a primary means of supply and collection, then, what if said grid was merely an emergency backup to more localized resources and assets? As we’re moving towards more of a connected world, we have the incredible opportunity to completely modify the way we view the interconnectedness of infrastructure.

The constant upheaval that has occurred in various sectors of the global economy over the past 25 years requires one, then, to begin to rethink the ‘necessity’ of natural monopolies in the water and wastewater industry. We are living in a world in which the technology to dethrone these monopolies exists, but disrupting the status quo and deploying at scale is an extremely telling task likely to take years. Even so, we must think outside the box to continue to improve the industry while also ensuring that these novel solutions will protect public health and safety for the long-term. Unlike the tech industry, the public health and safety implications of this infrastructure transition loom large, yet also make the opportunity all the more enticing.

In the United States, there are approximately 42,000 independent water and wastewater utilities. Much has been written across a number of industry journals regarding the need to consolidate these utilities in order to gain the economics of scale. But what if that basic assumption lacks creativity? What if, instead of consolidating, we moved into a market where every neighborhood has multiple, competing utilities? We must stop promoting consolidation to maintain existing water infrastructure just like cell phone companies stopped buying up telephone lines in the age of the cell phone.

Today is an age of incredible innovation reaching across every industry throughout the world. The water industry has experienced its own innovations, yet in some ways seems stuck in the past. As we move into the end of the 2010s, we must begin to ‘take a step back’ and look at all of the technologies in front of us so as to decide what the water and wastewater industry of the future looks like. We should not rely upon the assumptions of the past the determine the future.

Disrupting the assumptions of natural monopolies, while seemingly impossible today, just may be the vision that we need.